Life is what you make of it.

‘SHEROES,’ a fun play of words on she and heroes, is a café in Agra. True to its name, it is home to many extraordinary women. Sheroes Hangout Café was founded by acid attack survivors to create awareness about acid attacks. It has now become a place that provides other survivors a chance to re-build their lives by giving them purpose and so the café is run entirely by them. 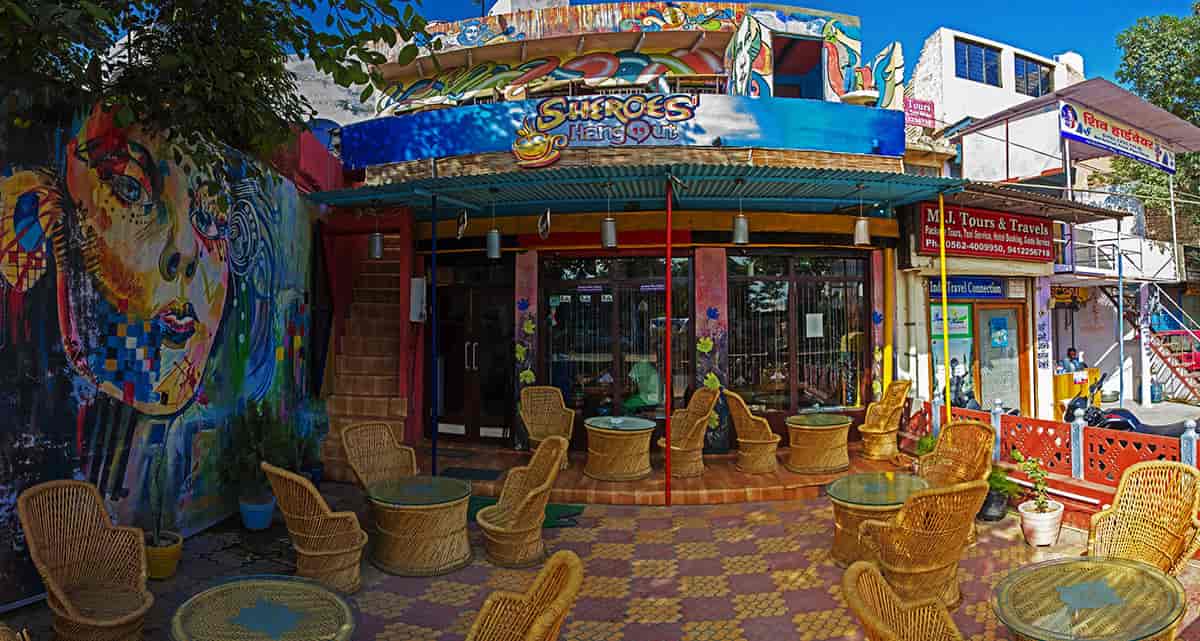 Sheroes is not just a café, it is an experience. The place exudes strength and positivity because of its employees, who have proven to the world, that they are more than their tragedy. The walls are decorated with artwork and murals that are aimed at telling a compelling story of the survivors’ struggles and triumphs. Recently, the Sheroes team has expanded and shifted to a bigger venue. They have even opened up branches in Udaipur and Lucknow. 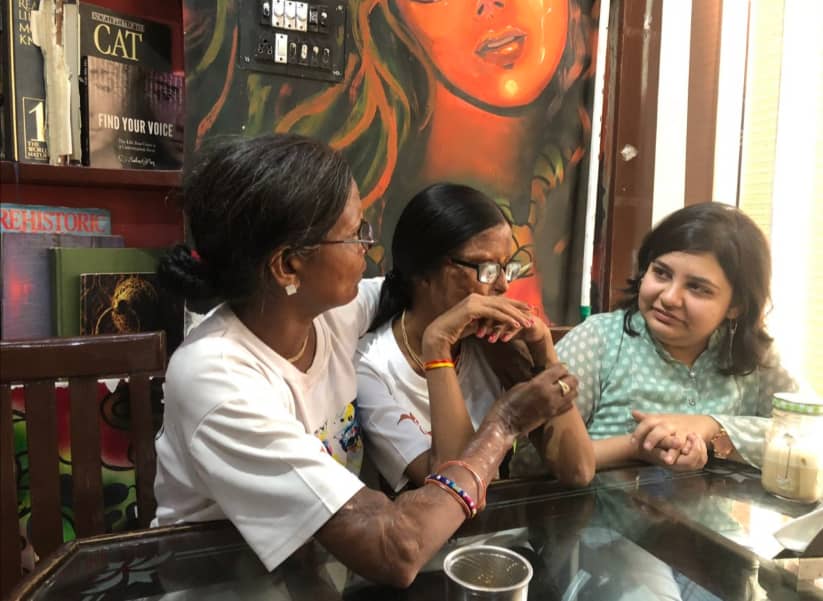 Despite the ordeal they’ve experienced, the women at Sheroes are full of hope. They’re an absolute joy to be around which is probably why we left the place with plenty of new friends. We spent an entire afternoon getting to know these women. We sang a few songs together and bought almost all of their ‘my beauty is my smile t-shirts’ because it’s a message that truly spoke to us.

Madhu and Dolly from Sheroes, had the sweetest things to say about our co-founder, Sameer Somal. They called him their “good friend, who is very kind,” and mentioned that “He is a friend on Facebook who keeps in contact with us often.” 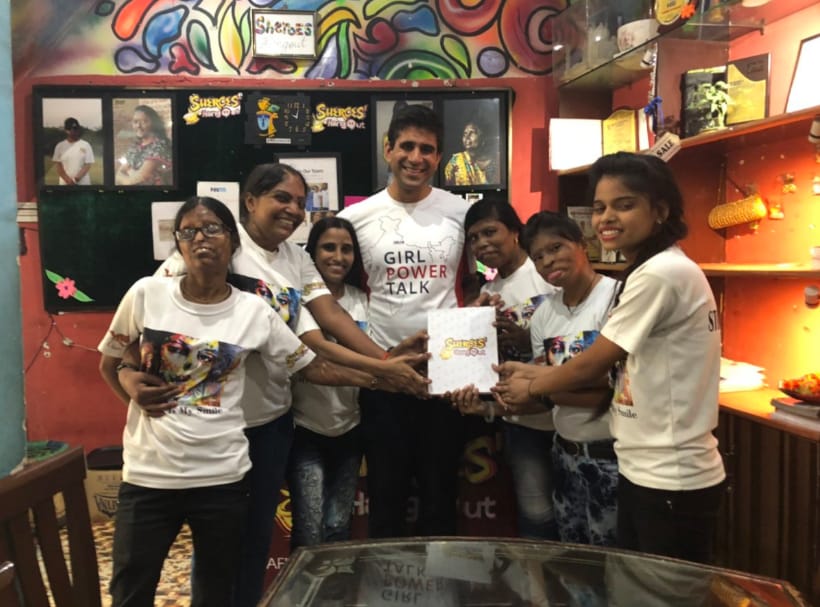 Madhu told us that they often put on music when the café is empty and, in her words, ‘dance like crazy!’ She also shared with us how she’s trying to be a better cook.

We asked Dolly about what she has been up to and with bright enthusiasm she told us that as of 2016 she has gone back to school. Her fellow survivors at Sheroes gave her the strength to stop hiding and made that possible. She now dreams of becoming a Doctor.

She went on to tell us about what had transpired on July 5th, 2013 and how she will now forever tell her story as before and after, a 27-year-old Pradeep Kumar threw acid at her on the doorstep of her own home. She told us how he had been harassing her for days but she never thought that he would be capable of such brutality. Pradeep Kumar was convicted in 2013 but Dolly’s struggles were far from over.

She lost sight in her left eye and suffered from burns all over her face, her abdomen and her hands. The days that followed proved to be the most difficult days of her life. Despite being on heavy painkillers, she was in a lot of pain. She said she repeatedly wished for death so her suffering would stop. Her skin felt like it was on fire.

The mental and emotional burden was far greater than anything we could imagine. The sight of her face wrecked her confidence. The first time she saw her face, she screamed. She said there was ‘nothing left.’ Her family hid all the mirrors in their house. 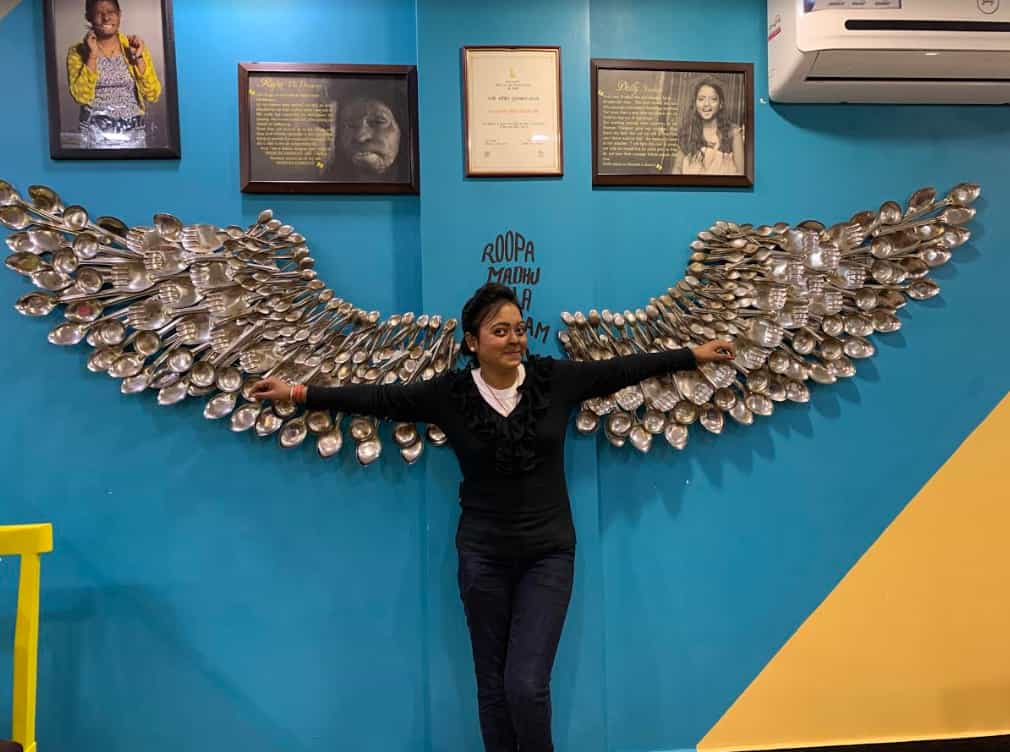 We do live in a world that greatly values external beauty. She recalled an incident where she overheard a girl call her ugly. She spoke about the depth of her grief at the loss of her face and despite all of it, how she is now doing so much better. Being a part of this community of survivors at Sheroes has helped her harness her inner strength and determination to face the world and most importantly, to accept herself.

She said, the first time she came to Sheroes, Sonia di at the café told her that she did not have to hide her face because she did nothing wrong. Sheroes is like her second family now, a place for her to belong, to grow.